From VoIPmonitor.org
Jump to navigation Jump to search

Our maximum throughput on a single server (24 cores Xeon, 10Gbit NIC card) is around 60000 simultaneous calls without RTP analyzing (only SIP) and 10000 concurrent calls with full RTP analyzing and packet capturing to disk (around 1.6Gbit voip traffic). VoIPmonitor can work in distributed mode where remote sniffers writes to one central database having one GUI accessing all data from all sensors.

VoIPmonitor is able to use all available CPU cores but there are several bottlenecks which you should consider before deploying and configuring VoIPmonitor (do not hesitate to write email to support@voipmonitor.org if you need more info / help with deploying)

There are three types of bottlenecks - CPU, disk I/O throughput (if storing SIP/RTP packets are enabled) and storing CDR to MySQL (which is both I/O and CPU). Since version 11.0 all CPU intensive tasks was split to threads but one bottleneck still remains and that is sniffing packets from kernel which cannot be split to more threads. This is the top most consuming thread and it depends on CPU type and kernel version (and number of packets per second). Below 500Mbit of traffic you do not need to be worried about CPU on usual CPU (Xeon, i5).

Since voipmonitor version 11 the most problematic bottleneck - I/O throughput was solved by changing write strategy. Instead of writing pcap file for each call they are grouped into year-mon-day-hour-minute.tar files where the minute is start of the call. For example 2000 concurrent calls with enabled RTP+SIP+GRAPH disk IOPS lowered from 250 to 40. Another example on server with 60 000 concurrent calls enabling only SIP packets writing IOPS lowered from 4000 to 10 (yes it is not mistake). Usually single SATA disk with 7.5krpm has only 300 IOPS throughput.

Main thread (called t0CPU) which reads packets from kernel cannot be split into more threads which limits number of concurrent calls for the whole server. You can check how much CPU is spent in T0 thread looking in the syslog where voipmonitor sends each 10 seconds information about CPU and memory. If the t0CPU is >95% you are at the limit of capturing packets from the interface. Your options are:

There is also important thing to check for high throughput (>500Mbit) especially if you use kernel < 3.X which do not balance IRQ from RX NIC interrupts by default. You need to check /proc/interrupts to see if your RX queues are not bound only to CPU0 in case you see in syslog that CPU0 is on 100%. If you are not sure just upgrade your kernel to 3.X and the IRQ balance is by default spread to more CPU automatically.

Another consideration is limit number of rx tx queues on your nic card which is by default number of cores in the system which adds a lot of overhead causing more CPU cycles. six cores are sufficient with up to 2Gbit traffic on 10Gbit intel card. This is how you can limit it:

If you want to make it by default create file /etc/modprobe.d/ixgbe.conf

The next important thing is to set ring buffer in the hardware for RX to its maximum value. You can get what you can set at maximum by running

This will prevent to miss packets when interrupts spike occurs

(put it all togather into /etc/network/interfaces)

On following picture you can see how packets are processed from ethernet card to Kernel space to ethernet driver which queues packets to ring buffer. Ring buffer (available since kernel 2.6.32 and libpcap > 1.0) is packet queue waiting to be fetched by the VoIPmonitor sniffer. This ringbuffer prevents packet loss in case the VoIPmonitor process does not have enough CPU cycles from kernel planner. Once the ringbuffer is filled it is logged to syslog that the sniffer loosed some packets from the ringbuffer. In this case you can increase the ringbuffer from the default 50MB to its maximum value of 2000MB.

From the kernel ringbuffer voipmonitor is storing packets to its internal cache memory (heap) which you can control with packetbuffer_total_maxheap parameter. Default value is 200MB. This cache is also compressed by very fast snappy compression algorithm which allows to store more packets in the cache (about 50% ratio for G711 calls). Packets from the cache heap is sent to processing threads which analyzes SIP and RTP. From there packets are destroyed or continues to the write queue.

If voipmonitor sniffer is running with at least "-v 1" you can watch several metrics:

heap[A|B|C] - A: % of used heap memory. If 100 voipmonitor is not able to process packets in realtime due to CPU or I/O. B: number of % used memory in packetbuffer. C: number of % used for async write buffers (if 100% I/O is blocking and heap will grow and than ring buffer will get full and then packet loss will occur) 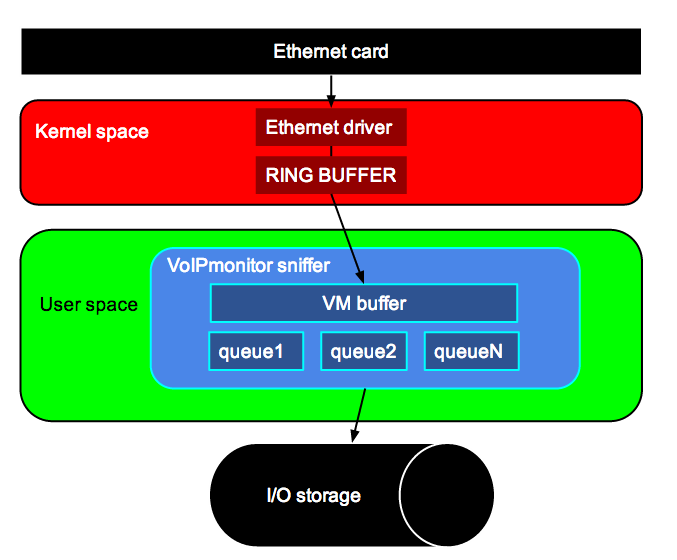 We have successfully tested 1Gbit and 10Gbit cards from Napatech which delivers packets to VoIPmonitor at <3% CPU.

Since sniffer version 11.0 number of IOPS (overall random writes) lowered by factor 10 which means that the I/O bottleneck is not a problem anymore. 2000 simultaneous calls takes around 40 IOPS which is 10MB / sec which can handle almost any storage. But still the next section is good reading:

The fastest filesystem for voipmonitor spool directory is EXT4 with following tweaks. Assuming your partition is /dev/sda2:

On many installations a raid controller is in not optimally configured. To check what is your cache policy run:

Cache policy write through has very bad random write performance so you probably want to change it to write back cache policy:

Recheck if the cache was really set to write back if not, you need to force write cache if battery is bad / missing with this command:

And then set the write back cache again

Please note that this example assumes you have one logical drive if you have more you need to repeat it for all of your virtual disks.

(Controller class 9 and above)

add to sources.list and install ssacli

Changing mode to writethru (for SSDs)

Before you create the database make sure that you either run

or set in my.cnf file in global section SET innodb_file_per_table = 1

this will prevent /var/lib/mysql/ibdata1 file grow to giant size and instead data are organized in /var/lib/mysql/voipmonitor which greatly increases I/O performance.

Write performance depends a lot if a storage is also used for pcap storing (thus sharing I/O with voipmonitor) and on how mysql handles writes (innodb_flush_log_at_trx_commit parameter - see below). Since sniffer version 6 MySQL tables uses compression which doubles write and read performance almost with no trade cost on CPU (well it depends on CPU type and amount of traffic).

Default value of 1 will mean each update transaction commit (or each statement outside of transaction) will need to flush log to the disk which is rather expensive, especially if you do not have Battery backed up cache. Many applications are OK with value 2 which means do not flush log to the disk but only flush it to OS cache. The log is still flushed to the disk each second so you normally would not loose more than 1-2 sec worth of updates. Value 0 is a bit faster but is a bit less secure as you can lose transactions even in case MySQL Server crashes. Value 2 only cause data loss with full OS crash. If you are importing or altering cdr table it is strongly recommended to set temporarily innodb_flush_log_at_trx_commit = 0 and turn off binlog if you are importing CDR via inserts.

The compression is enabled by default when you use mysql >=5.5

set in my.cf in [global] section this value:

If you choose KEY_BLOCK_SIZE=2 instead of default 8 the compression will be twice better but with CPU penalty on read. We have tested differences between no compression, 8kb and 2kb block size compression on 700 000 CDR with this result (on single core system – we do not know how it behaves on multi core systems). Testing query is select with group by.

Read performance depends how big the database is and how fast disk operates and how much memory is allocated for innodb cache. Since sniffer version 7 all large tables uses partitioning by days which reduces needs to allocate very large cache to get good performance for the GUI. Partitioning works since MySQL 5.1 and is highly recommended. It also allows instantly removes old data by wiping partition instead of DELETE rows which can take hours on very large tables (millions of rows).

This is very important variable to tune if you’re using Innodb tables. Innodb tables are much more sensitive to buffer size compared to MyISAM. MyISAM may work kind of OK with default key_buffer_size even with large data set but it will crawl with default innodb_buffer_pool_size. Also Innodb buffer pool caches both data and index pages so you do not need to leave space for OS cache so values up to 70-80% of memory often make sense for Innodb only installations.

We recommend to set this value to 50% of your available RAM. 2GB at least, 8GB is optimal. All depends how many CDR do you have per day.

When there are used SSDs (partitions with fast access time) for database's datadir, make sure that mysql options are not the limiting. Optimal settings of following options is essential. (Example is for mysql8.0 server with 256GB of RAM and SSDs fs mounted with options (rw,noatime,nodiratime,nobarrier,errors=remount-ro,stripe=1024,data=writeback):